It just took one view of the striking hot pink livery of the Folens stand to make me wonder – out loud as it happens – what Ian McCullough would make of it all. I proudly admit to being a fangirl of Ian’s column, turning first to the latest episode of his ‘musings’ each time my copy of Science arrives. This wondering out loud brought forth the information from John Daly that Ian was at one of his ‘ancient car’ rally events. Hence my humble contribution here – a brief musing on this year’s ISTA conference in NUIG on April 12th.
I could only attend for the Saturday afternoon events, but how happy I am that I did so. From the moment I was welcomed at registration by Sean Fogarty, a former Junior Science Support Service colleague (and now a future ISTA leader as I learned later), I got the sustaining buzz that comes from meeting friends and hearing inspiring teachers from the world of science. Before I’d even got in the door I met with Kathlyn Hennelly from my college days in UCG. She and colleagues from sister school Loreto Balbriggan had been shortlisted for an award so it was all Loreto fingers crossed for the day!
At the exhibitors stands I got to catch up with friends – Stephanie O’Neill from Science Foundation Ireland, my former colleague and leader of the Discover Sensors team; my dear cousin Seamus Amond of Shaw Scientific; Willie McTiernan from my edtech world, now representing the Scientix project; Sheila Porter and George Porter sailing the rebranded Scifest ship.
And so to the back rows of the D’Arcy-Thompson theatre for the afternoon – unusually for a weekend conference, the entire afternoon’s business was taking place in the one large theatre. Not a bad idea, as it turned out – the short comfort breaks between sessions allowed time to chatter to neighbours instead of rushing off to another venue. 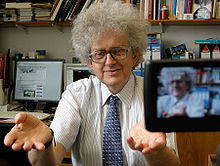 What a surprising treat it was to find myself listening, live for a change, to Prof Martyn Poliakoff! Yes, him of YouTube Periodic Table of Videos fame, him with ‘the hair’. He was genial, humble, gentle, funny. He introduced himself as the current Foreign Secretary (!) of the Royal Society. He spoke with pride as he showed us a photograph of himself greeting our Michael D. Higgins just three days beforehand during our President’s State visit to the UK. His story of the evolution of periodicvideos.com was beautifully told. This resource ticks all boxes for excellent integration of ICTs into science education. If you have not introduced it to your students, do so immediately! I cannot wait to meet my 1st Years after the Easter holidays and tell them I who I met. (Each September, I ask my new science students to ‘draw a scientist’. Invariably, the majority draw an Einstein like figure, which I use to I prompt a conversation on stereotyping in science. Mmmm…I am going to have to re-think that exercise now.) All-in-all, a privilege for me a teacher to be taught a lesson by one who so obviously still loves his subject, and his students – and still loves learning.
Then we had the delivery of Prof Áine Hyland’s ISTA-commissioned report on the design of Leaving Certificate syllabi in Ireland. Professor Hyland gave a clear overview of her research in her trademark matter-of-fact style. There was not a lot of time built in for discussion, but copies were distributed to all attendees. All science teachers in Ireland should read it. A copy is available for download from the ISTA website.
The Annual Business Meeting, with a much larger attendance than many I remember, then took place at the speed of light. There was the usual round of reports, nominations, secondings and reconfiguring of the office holders. Most attention and interest was focussed on the three lightning-fast presentations updating us on the recent work of our Leaving Cert subcommittees. There were (can I say ‘the usual’? – it just seems many of us oldsters have been at this point more than once before) the usual mumblings and grumblings from folk present, and a popular call for an EGM to discuss the rollout of these new syllabi. Well done (and further good wishes) to our ‘Passionate Physicist’ Sean Finn, our ‘Cool Chemist’ John Daly and our ‘Brilliant Biologist’ Úna Moroney, under the leadership of our incoming chair Stephanie Holden, for the ongoing high level work they do on our behalf with the subcommittees and with the NCCA, all of which can be followed at branch meetings and online.
After a short oxygen break, we reconvened for the main event – the deciding factor that had drawn me to Galway for the afternoon – the closing Keynote lecture by Prof Jim Al Khalili. He is @jimalkhalili to those who follow him on Twitter, the ‘say it in plain English’ TV presenter, and the author of Quantum: A Guide for the Perplexed.

He presented his story, a sort of quantum physics-biology mash-up, in terms that helped the rest of us get a hook into understanding them. (I was reminded of a remark by another physicist, Leon Lederman, in DCU several years ago – first teach children Physics, then Chemistry, and only when they have mastered those, let them try Biology. This remark was greeted with hilarity at the time.)  Jim explained very difficult, very spooky science with humour, and passion. And dealt with audience questions in an inclusive and reflective manner. Another example of great teaching. (I couldn’t help wondering as he spoke about quantum tunnelling – perhaps it could be used to explain how our outgoing Chair Mary Mullaghy has seemingly been everywhere at once during her tenure?)
One thing that was lovely to watch during the afternoon in the lecture hall was that each of the two overseas speakers sat in on the other’s session, even though they took place hours apart. Each also referred graciously to each other’s knowledge during their presentation.
And then (Zebedee said) it was time to go home. My apologies for not attending the whole conference, and my thanks to all organisers for a wonderful afternoon and a lifetime of thoughts taken away…and now it’s back to you, Ian!