I’ve had ethics on the brain for a while – building and submitting the ethics submission for my PhD research has been done and delivered. Awaiting approval is providing a short period of relative calm and a chance to catch up with the real world.

So when on November 12 I read a tweet (which quickly grew to be a long thread) from someone I really admire, the banlaoch* that is UK researcher and senior academic Trisha Greenhalgh, both the content and the context stopped me in my tracks. I had time to react and reflect on the fact that this had happened, that it had happened to someone at the top of her profession, and that it had been done before her professional peers. Ugh.
[*banlaoch = the Irish term for a female warrior or heroine]

A couple of weeks later, this subject of ‘conduct unbecoming’ during post-presentation discussions arose again for me, as it became part of the exit conversation among researchers attending an IPA (Interpretive Phenomenological Analysis) colloqium at the Technological University of Dublin. I recounted the recent experience of Prof. Dr. Greenhalgh, and my dismay at the unethical behaviour towards her of the Chair who should have been steering everyone’s behaviour by example. It also brought to my mind the times the exact opposite was in place, and and the rules of engagement are declared openly at the beginning of a meeting, conference, or seminar. I am now thinking that declaring the rules of engagement should be the formal opening action of every meeting, providing a point of reference to anyone at the meeting who may need to to call out inappropriate behaviour by anyone (including the Chair!). Hopefully it would be like one of those ‘break glass in case of emergency’ things, never needed but unambiguously available if necessary. 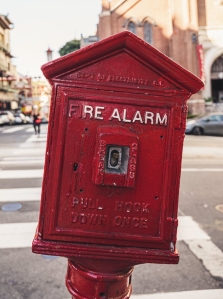 Reflecting on all of this, here is my personal appreciation of the upfront declaration of expected ethical behaviour … an important part of my research journey is being in the company of others working in the same sphere as me – my supervisors, my fellow PhDs, and special interest groups – formal and informal – that form around a topic of interest to me. One such SIG is the Network for Educational Action Research in Ireland. I attend meetings of this group several times a year. Each meeting starts with display of the same slide – a summary of the ethical stance of the group and the agreed standards for procedures and protocols. These are also openly declared on the NEARI website, and combine the particular values of the group with the universal values espoused in the Teaching Council of Ireland. I find this practice offers a professional reminder to all present of the expectations we have of each other, and infuses the meeting from the start with a collegiate atmosphere. The ritual aspect of the practice acts as a subtle personal safety blanket for me – I am assured that the meeting will be steered by a Chair guided by a moral compass visible to all. It is a practice I would like to see more widely adopted at the meeting of other special interest groups in academia and education.

The NEARI statement that is displayed at the beginning of each NEARImeet is online at
http://www.eari.ie/neari-network-for-educational-action-research-in-ireland/neari-ethical-statement/ 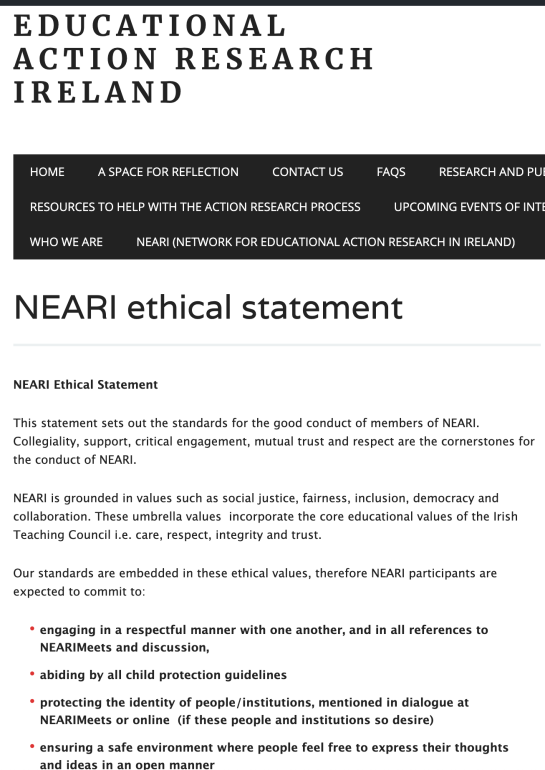