MappingUnconferencesA3 … this post is only about four months late (the thought-to-action time lag is getting greater all the time). I’ve wanted to thank Tom Farrelly since late May for curating a Gasta session at #edconTCD on May 18th, and it struck me that there were so many other role models of the unconference world to whom I owe a debt of gratitude for all I have learned from each of them. As well as marvelling at Tom the Gasta guru, I have watched Shelli Ann Garland inject Pecha Kucha style to the Trinity College Dublin School of Education last year; collaborated with Richard Millwood introducing Open Space Technology in both CESIcon and at ScratchEdMeetups; admired Eoin Kennedy herding huddles at CONGregation each November; twice been ‘lobbed’ by John Davitt at Learning On A Beach; watched with deep admiration how Frank Sabaté from Catalunya combined cheeerleader and MC roles at many many Ignite sessions at three successive Scratch conferences in Europe (BCN, AMS, BDX); I have been V-connected to many conferences now thanks to Kate Molloy of CESI; and as for TeachMeet, there have been so so many many who have inspired me over the last decade however the epiphany ‘big bang’ moment for me was watching founder Ewan McIntosh unconferencing the Scottish Learning Festival way back in 2008. Thank you all …

… I include three things in this post – the slides I used at the edconTCD Gasta session in which I tried to explain the evolution of unconference world in 5 mins; an explanatory overview of the broad unconference world that I have been delving into since I began PhD research into TeachMeet [cross-posted as a #cong19 blog entry]; and an updated version of my MappingUnconferencesA3 I have come across, summarised origins, evolution, governance, and philosophies of each … 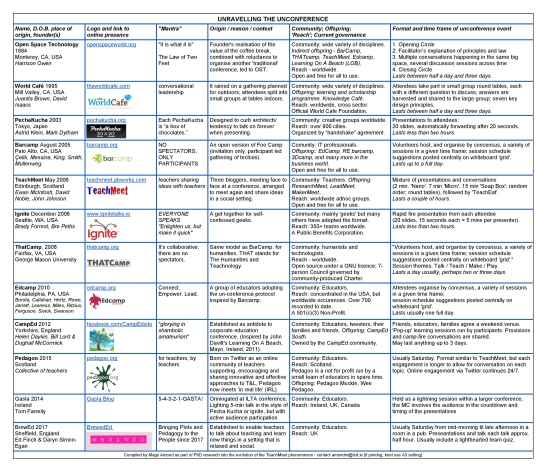 Researching the origins and evolution of TeachMeet brought me into the hall of mirrors that is the world of a recent global phenomenon – the unconference. Although the name comes from the tech community, coined for an XML developers conference in 1988, the idea is attributed to Harrison Owen and the Open Space Technology method he introduced in 1984, turning the traditional menu-driven conference format on its head and introducing more of the primeval conversational formats that attendees obviously appreciated, because it has flourished, replicated, and evolved ever since.

The main characteristics of the unconference, inherited from Owen’s Open Space, are high levels of complexity and diversity, potential for critical discussion, being driven by passion and responsibility, and the deployment of “the one law – if at any time you discover you are neither learning or contributing, use you two feet and move on”. Most people who use it refer to it now as the Law Of Two Feet. It is a very powerful permission to grant to participants, running counterintuitive to the ‘sit and suffer’ tendency when one it stuck in the ‘stand and deliver’ conference situation. Switching the brain and the body to unconference mode may take a while – timetables and agendas are built by assent and by participant choice – some patience is needed, and confidence, and there may be bite marks on the teeth of a control freak for the first while. It can demand a leap of faith, and provide a giddy sense of freedom. Perhaps the best descriptor for the complex-but-simple atmosphere of an unconference is the Dee Hock coined adjective chaordic. Dave Winer’s “What Is An Unconference” blog post from 2006 probably sums up why folk flip from conference to unconference when he says “This observation may turn out to be the Fundamental Law of Conventional Conferences … The sum of the expertise of the people in the audience is greater than the sum of expertise of the people on stage.”

Looking across and down the history of modern unconference formats, I find they fall into three structures
(i) broad discursive unconferences with long time slots devoted to community conversations in an agenda agreed at the start of the day (Open Space, World Café, BarCamp, EdCamp, CampEd);
(ii) narrower hi-octane sessions with very short time frames and strict rules for each speaker (Pecha Kucha, Ignite, Gasta); and
(iii) hybrids with elements of both (TeachMeet, Pedagoo, BrewEd, ScratchEdMeetUp, ConGregation, Vconnect).

In terms of organisers’ deploying these unconference formats, at least five methods have crossed my horizon since I began to observe, each with varying degrees of openness and inclusion.
1 – Independent unconference events:
As in the annual event in Cong, most MeetUp, BarCamp, EdCamp, Pedagoo, BrewEd, World Café, and Open Space Technology gatherings are organised as stand-alone events, independent entities with open access for all interested parties to attend
2, 3, & 4 – Unconference events attached to conferences:
> many unconferences are doing what their names suggests and getting attached to an established conference as a fringe event outside the published timetable – some TeachMeets and MeetUp are organised this way; these may or may not be restricted to those attending the parent conference.
> other formats have evolved within the conference setting: using an unconference format for some activities during the conference schedule – one way is to include a TeachMeet, Gasta, Pecha Kucha, or Ignite session to vary the pace, inject energy, and open the floor to voices and ideas that might not other be included.
> another emerging idea is to offer a Vconnect session so that those not at a conference in person can digitally/virtually connect and join a conversation with those at the conference.
5 – In-house unconference events:
Many educational, community, business or special interest groups are adopting the unconference ‘caucus’ approach for team meetings and professional learning events. Access is limited to the relevant community, but speakers and presentation come from within the working group.

There is of course way way more to unconferences than what I have written here, which is a potted history account from my own experience and research. If you know something I should include, feel free contact me. [ amondm@tcd.ie ]

A spoken version of this post is here, a 7m 30s listening at 1x.
[Thanks as ever to my hero James Crook for the beautiful software that is Audacity. It gives me delight each time I use it.]