On Saturday July 20th, Richard Millwood is hosting a TurtleStitch booth at Dublin Maker. He will be ably assisted by John Hegarty and Mags Amond. All three are active members of CESI. TurtleStitch, the brainchild of Austrian Andrea Stalder-Mayer, allows users to direct a modern embroidery machine to output designs which have been coded on a computer. Programmed designs can be shared and remixed among the worldwide TurtleStitch community. John is network manager and Computer Science teacher at Clongowes Wood College, Richard is a CS researcher at Trinity College Dublin, and Mags is a retired teacher currently doing PhD research on TeachMeet. Here’s what each says about their involvement with TurtleStitch … 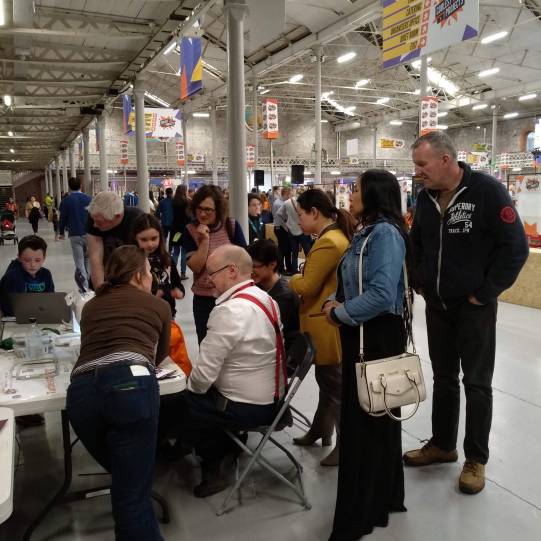 Richard :: I first started learning about the Turtle Graphics microworld and the Logo language in the eighties. I found it a powerful way to introduce the key elements of programming in a way that could lean on the imagination and experience of student’s own bodily movement to debug their attempts to program. Bugs (errors) in the program you made were opportunities for review, improvement and above all learning. Turtlestitch has been a revelation in refreshing interest in this approach. Providing such delightful outcomes has been an enormous asset, but also reviving an interest in art, embroidery and mathematics. Much of the work I have made is a re-implementation of artists such as  Vera Molnár and computer scientists / mathematicians such as Harold Abelson, Andrea A. DiSessa, but some is the fulfilment of youthful artistic tendencies revisited in later life! Learning about the crafts of embroidery and programming, whilst engaging with these powerful creative drivers is hard to beat! Examples shown here are from the TurtleStitch screen, showing thread in black, stitch points in blue and jump stitches in red.

John :: I can’t remember my first encounter with Logo, a programming language designed in 1967 by Wally Feurzeig, Seymour Papert, and Cynthia Solomon but safe to say it was a long long time ago. I suspect it was at a session with Dr. Elizabeth Oldham of TCD back in the 80’s. Over the decades, yes unfortunately I can measure in decades, my encounters with teaching/learning programming regularly tap that original wellspring. Logo begat Scratch which begat Snap! which in turn, among other gems like Snap4Arduino, BeetleBlocks and NetsBlox, begat TurtleStitch.

I’m always on the lookout for ways to engage my students with programming and in recent years the area of physical computing has become so much more accessible with the development of low-cost sensors, the availability of cheaper more powerful microprocessors like the Arduino range and more recently the very low-floor / high-ceiling opportunities facilitated by the BBC micro:bit.

TurtleStitch, the result of an ongoing collaboration between Andrea Mayr-Stalder and Michael Aschauer, offers a very different entry point to the world of programming and physical computing, one that appeals to the artist/maker in us. With a few blocks of Logo Turtle Graphics style code outputted to an embroidery machine, it enables the production of something beautiful and meaningful to the creator. Smiling students leaving the class holding the piece of embroidery created by them using their code is something that might be hard to put an objective measure on but any teacher will tell you it is priceless in their world.

In my school we are at the early stages of developing a maker space and the investment in an embroidery machine at the tail end of last term will I hope be the first of a number of tools we will make available to students. A maker space will be an inspiring resource for the Junior Certificate coding and Leaving Certificate Computer Science classes without a doubt but it should also facilitate crossover curriculum activities with other subjects, particularly in the areas of Art and Science and hopefully others as well – time will tell.

Mags :: My delight in being part of the TurtleStitch world is that it marries two things I like – textiles and computers. The extra variables – fabric, threads, stitch types – allow one design to have more than one output. Watching the reactions of families who see it for the first time is an extra treat. The opportunities offered for cross-curricular work are exciting – there is mathematics, art, graphic design, textiles and more in this. On top of that, this new generation of sewing machines are beautifully engineered and a treat to use. And on top of that, the worldwide TurtleStitch community is filled with generous supportive creative folk who are joy to be with. And on top of that again it makes me smile, after decades spent among women (my mother, my aunties, my friends – fiendish seamstresses all) with sewing machines, to see the ‘bro’s buying and deploying sewing machines  🙂

Richard, John, and Mags look forward to meeting with all and sundry at Dublin Maker.