Only a week late writing this – took a while to recover from a great day at Lough Boora Discovery Park on June 8th. I never knew it was there, it is quite the hidden treasure. Anyway, this is how the story goes …

Vanessa Greene sent a suggestion/question out to her mob – when can we have a ‘play date’ please? It was received as a very timely idea – we are always meeting at places and events where we are so busy we never have time to talk to each other.

Roisin Markham stepped up, referee’ed the settling of a date, and found this ideal geographically central spot, as we’d be coming from all four provinces.

And so we turned up, a baker’s dozen motley crew of makers. We had a long and rambling walk through the Lough Boora Discovery Park, followed by a long and rambling talk on the café terrace, and spent a very long and very rambling afternoon at a nearby indoor space (which had a kitchen so we could graze at will on our picnic rations).

We shared ideas, tried out each other’s current projects, and just played about with stuff. There was no timetable – we had the Law of Two Feet combined with the light touch  curation by Bean a’ Tí Roisin who gently wove our ideas together as the afternoon progressed. As for me, I got ideas for developing a Grace Hopper nanosecond activity thanks to a soldering adventure by Kathryn Parkes and Katie Chapman; I may have seen Richard Millwood swoon when during his discussion with Mary Loftus she produced Papert’s Mindstorms from her bag; I watched Pamela O’Brien showcase some of her latest intricate origami designs to the delight of all present; I was introduced to a teeny python microprocessor called Pew Pew by Vicky Twomey-Lee (delicate soldering award for which goes to Michael Twomey); I played around to good effect with adding a diode component to Chris Reina’s cardboard circuits (during which it was also discovered that Vanessa’s super brownies, although delicious, are non-conductive); I had ‘hard fun’ integrating new ideas for sloped marble runs with Hassan Dabbagh, Kathryn, Pamela, and Mary Carty. But most importantly, I got to the blessing of a time and space to chatter and receive the wisdom of friends. As a group we had a moment where we marked the fact it was just after B-day, the fourth anniversary of our unforgotten inspirational, Bianca Ní Ghrógáin. It was lovely, and I can’t wait to do it again. Thank you all. 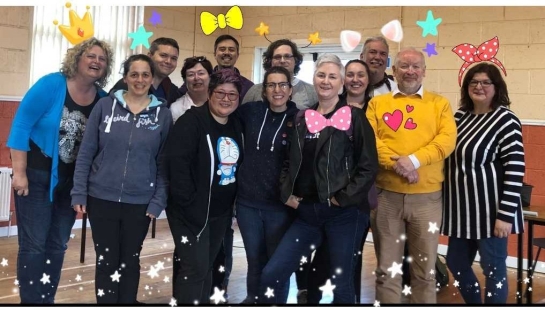 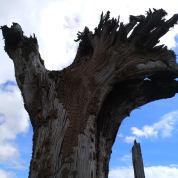 Not to mention the tinkering that resulted in this … #discoverymakers pic.twitter.com/La8MKyYfeX