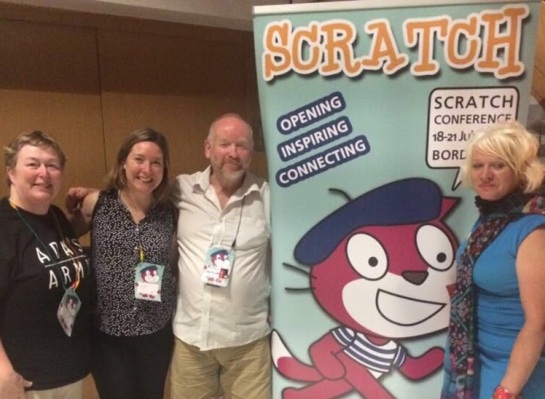 Having now attended several Scratch conferences, there is something that cannot be denied – number one variable to make it such a good experience = the people who attend. [It was our friend Bianca Ní Ghrógáin RIP who first referred to the Irish delegation in Barcelona 2013 as ‘the Fellowship’.] And though the content listed in the programme suggests a super few days of learning, it comes nowhere close to defining or explaining what happens on a personal level. Everyone who attends is there to learn, but also to share. One might sniff a flavour of the atmosphere along the Twitter timeline, and I think Steve Holmes and  Sam Aaron both sum it up well as examples of many folk’s “exit Tweets”:

My conference souvenir. The valuable stuff is in the head and the handshakes. #Scratch2017bdx @scratch2017bdx pic.twitter.com/vXJ8d51JgK

So sad to leave #Scratch2017bdx the best conf I've been to in a *very* long time. I feel like I've been welcomed into a lovely new family 🙂

So many of the conference social media uploads refer to ‘family’ – the Scratch family from MIT led by Mitchel Resnick, the Coderdojo family, the ‘Orange’ family, Ada’s Army, the Catalan family, the Warwick family, the TeachMeet family (woohoo, Drew Buddie, you did it again, oh yeah), the BJC/Snap family (or the ‘mens shed’ as it always brings to mind when I see them in a happy huddle), and now the Africa family – and it looks like this last may be inheriting the mantle for hosting Scratch 2019.

On the train headed to Scratch Conference Bordeaux with the @Scratch Team. #Scratch2017BDX see you all soon! pic.twitter.com/7lAufUOUu8

And that's our workshop done! Thanks to all who came! Catch us at 3 at the poster session to find out more about Experisense #Scratch2017BDX pic.twitter.com/gdCTgIS6em

Thanks to #african in #Scratch2017BDX. Advice : Collect visual about your actions and continue asking for help. You rocks #bam4scratch 👍 pic.twitter.com/KE157lnbbi

Joek’s team (now includes his own personal family that he drafted into to team) is very special, and could grace any action movie that needs mountains moved: Sarah, Rebecca, Aris, Isa, Margaret, Samir, Marie, Genevieve, Mags, Frank, Marie, Samir, Susan, Adel, Alan… [please let me not have forgotten anyone, but forgive me and correct me if I have!]

The “Young Ones” in the family, referred to as the next generation by Saskia Leggett of MIT, asked for advice during their closing Keynote. We’ll be watching out Samson, Matthieu, Taryn, Alden, Jennifer, Linda and Rosie!

Watching the next generation of Scratchers facilitate the final #Scratch2017BDX session is making my heart so full! @scratch pic.twitter.com/YLwuZSQyYn

My Scratch experience would not be the same without my travelling companions and roomies – John Hegarty, the original moving blue dot of The BCN Fellowship; Richard Millwood, Eileen Brennan Freeman and Natalia Monjelat of our gorgeous Air bnb (what a stroke of luck that you took a chance to share with us, Naty!). So much thanks to the four of you for the company, the fun, and the care taken of each other at Rue Cheverux and across the city all week. 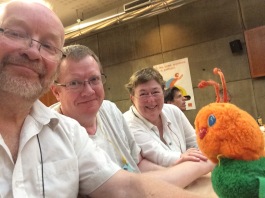 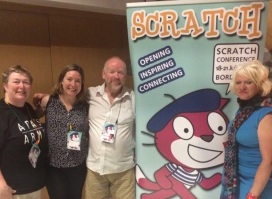 And finally, most importantly, my special Red Letter SuperHero award goes to my fellow Code Week EU Ambassador Alan McCullough, who was not only super generous with his car, his time, his patience, but gracefully kept all his plates spinning with Irish good humour, 24/7, all week.
A few small birds tweeting reminded me that today is your birthday – hope it has been a special day on holidays with your family, Alan.