10pm. At the A1 building at Bordeaux University, we are invited by Yoan Mollard and his team to programme the lighting display on the front of the building, a project called the Arbalet Frontage; and given a tour of the control system by Yoan.

The entrance to Bordeaux University

We used Snap! to programme the lighting display across the frontage 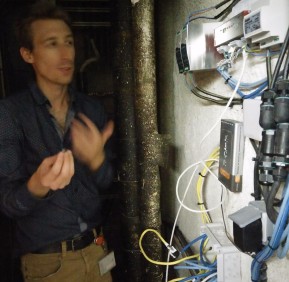 Yoan explains the control system, which is in the crawl space in the building.

Tuesday July 18 2017, 10am. During the programme planning summit back in April, we had decided to have a session open to French teachers. Susan Ettenheim, Wolfgang Slany and me, being teachers curious to meet our peers in France, agreed to get involved, and Samir Saidani made all the connections. 60 teachers turned up. Our facilitator for the morning, Thierry Viéville of INRIA, took us deftly and bilingually through an Open Space style morning of call and response discussion followed by workshops. My once-fluent-but-almost-forgotten French had to be deployed as our atelier worked together thru the human circuit with the newly named ‘Pieu Pieu’, and then made some binary code jewelry and some glowies. Thierry called us back to a standing circle and the witnesses reported what had been discussed in each workshop. Turns out the teachers of France are no different to those anywhere – they were concerned with providing the best possible learning experiences for their classrooms, and those who joined us in Einserb for the morning were prepared to give up their free time to find and share ideas to this end.

1.30pm. In the auditorium, Didier Roy of INRIA was hosting a colloqium on all ting robotic; but as Bernat Romagosa and Jens Monig had offered a day long Beetleblocks Masterclass, with some 3-D printers courtesy of Yoan so that participants could produce their designs, I went upstairs to observe the second half of the day. Listening to Jens’s perfectly and roundly explain the snaggier points, and watching Bernat’s graceful teaching and gentle troubleshooting is a treat; and the humility in both programmers is a charm to observe. Watching my friends immersed in their projects was good too, and confirms my idea that Beetleblocks is a definite contender to be used in our imminent Computer Science curriculum in Ireland. 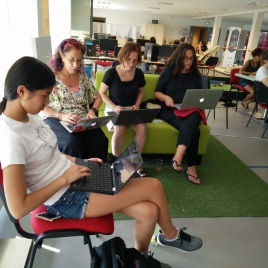 Jennifer Lin, Susan Ettenheim, and Andrea Mayr-Statler getting into Beetleblocks 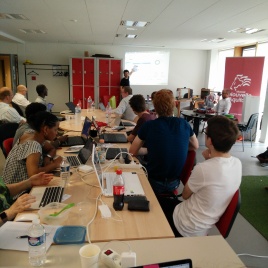 8pm. The Official Opening mixer buffet and pre-registration took place in Cap Science, in the other side of town, beside the beautiful Cité du Vin building. Brian Harvey gave us his quirky personal view of 50 years of Logo, and we had the launch of the lovely Scratch Tales book, containing stories from users in 25 countries, and beautifully designed and produced by Derek Breen. In the darkened theatre, Uwe Gesler delighted with a fantastic presentation built with dozens of programmable night lights. And as if we’d ordered it (who knows, with Joek Von Montfort, anything is possible?), we ended the evening out on the balcony over the Garonne river watching a massive lightning show – have a look at the report that went out via getty images.

All this, and the conference proper hadn’t even started yet. 😸.