Scratch2017BDX, one of many Scratch conferences this year, took place in the city of Bordeaux, France. Officially the conference dates were Wed-Fri July 19th-21st, but when all the extra-curricular and unconference happenings were added in, there was ‘Scratching’ from Monday until Saturday. It was a privilege to see the conference unfold from behind the scenes this time, and to work with organiser extraordinaire Joek Von Montfort and the team he assembled from Europe, the US, and Africa. The various facets of the week (the pre-conference preparation, the programmed conference, the unconference events, the masterclasses, the extracurricular time with friends of the Scratch ‘family’) each had many special moments; it will take some time to process, and post, them all.
This conference was like a continuation of the previous two European Scratch conferences conceived and led by Joek – Barcelona 2013 and Amsterdam 2015, and the many friendships born in these events have gotten wider and deeper with time. May this trend continue… 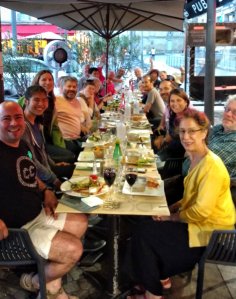 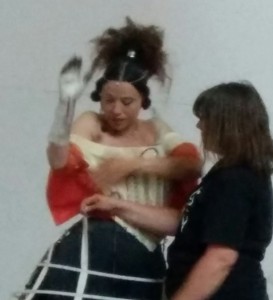 KD dressing Zoe as Ada before the show

Ken, Richard, and colleagues discussing the future of programming.