It was a treat and a privilege to represent CESI at the annual NAACE conference on March 24th.  This year there was a NaaceMeet held for the first time, and it proved as successful as did the first…

It was a treat and a privilege to represent CESI at the annual NAACE conference on March 24th.  This year there was a NaaceMeet held for the first time, and it proved as successful as did the first CESImeet fadó fadó in Dublin. Hopefully it will become a NAACE fixture.

This NaaceMeet was a relaxed round table affair. Drew Buddie had appointed a “table 10” in memory of Bianca Ní Ghrógáin who’d presented at the conference last year, and who’s presence at table 10 had added so much fun and joy to the gala dinner. I spent a lovely evening at this #Table10 in the company of Dughall McCormack, Jo Badge, Zoe Philpott, Jacinta Diamond, Donna Vaughan, Sarah Profit Ransay, Dylan McCarthy and Serena Davies.

Thanks folks – as ever, the best “take away” from a ‘meet is the new and deepened friendship gained. This meet also was a sort of “metameet” – a lot of the evening became call and response (the throw-it-about microphone really worked here) on the subject of TeachMeet itself. (disclosure – it may have been prompted by my “presentation on a napkin”). This could and should be part of any and every TeachMeet…and judging by the very late night conversations during the apres-meet I’m not alone in that opinion. 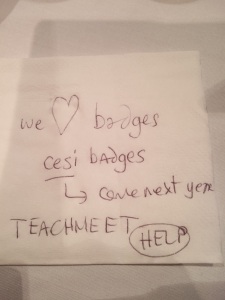 The conference day itself was a good day. I legged it early to a workshop wherein I could get eyes and hands the new BBC Micro:bit with Yvonne Walker from CAS. It was a very short workshop, but the perfectly manicured Donna and I got our little “HELLO” marquee message to run successfully.

I loved the lively and argument-provoking afternoon panel discussion entitled Will VR Kill the Video Star? It was convened and chaired by Drew Buddie, with provocateur Donald Clark of Plan B, data driven choreographer Genevieve Smith-Nunes and Ada.Ada.Ada performer Zoe Philpott. The only down side to this inspired session was that it ended (in real life only, of course!).

Having heard Serena Davies speak at #tmBETT16, and met her for real at #naacemeet Table 10, it was terrrific to see her receive a NAACE Impact award. Go, Serena!

Refreshments all day were ubiqitous, plentiful, and very good quality. I had the loveliest lunchtime conversation with Martin Bailey of Animate2Educate – reminding all conference convenors that the best times for attendees can be in-between times.

Lovely chatting to @magsamond over lunch @Naace conference. The informal conversations are so precious at such events. #naace16

The other session that stood out for me was the final one of the day – an informative and energising 30 minutes with Matt Rogers and Sharon Ashley on open digital badges. We’d discussed this at the ‘meet on the previous evening (how long ago that now seemed!), when I’d been delighted to boast that CESI had badged both #tmcesi and #cesicon last month. This session was fun, we got to partake in a live badge claiming cycle, there and then, at the conference. Not your average graveyard shift – well done Matt and Sharon, you both deserve a “keep your nerve” badge.

I was pleased to be present at the NAACE AGM when Donna Vaughan from Northern Ireland was elected to the board of NAACE. On behalf of CESI and myself, best wishes to Donna in this venture.

ps – despite “the week that was in it”, I had to explain, THREE times in 24 hours, that Ireland is NOT part of the UK…sigh, sigh, sigh.