There’s me wearing my cool TeachMeet Bett T-shirt (love it, thanks organisers and sponsors TES – though sorry to see no TES at this BETT show). I won’t list the presenters as others have done so in great blog posts already – see super posts from Pamela O’Brien,  Helen Bullock, or Kate Murray (& Larry Leprechaun!) for details.

The front two rows of the BETT arena contained the Irish delegation, or the Fellowship of the CESI ring as Bianca Grogan calls it – Nigel Lane, Pam, Hellie, Bianca, John Heffernan, Sarah Jane Carey, Kate, Kathleen Buckley, Pat Seaver, Rory McGann and Fred Boss were spotted tweeting and hooting. (Hellie was taking note of everything in detail – watch out for some fireworks at TeachMeet CESI in the Clayton Hotel in Galway on February 28th! I know that feeling, Hellie, watching another TeachMeet is like looking in another teacher’s room for helpful ideas).
It was strange to be in rows instead of in the round – very little wriggle room – very little cross table eye contact – I missed those. Still, the audience was very receptive to all the presenters, and we had some great, thought provoking, presentations for sure.

I loved the presenter Bingo that ran though the evening, made for good fun, prompts to remember who was who, and was handy to jot down notes when the phone battery died. I loved the cartoonist team who ‘live graffiti-d’ the entire evening for us – the final wall is here at Fred Boss’s Vine.
I like Russel Tarr’s new version of the Classtools random name picker, and the idea of lining up some speakers in advance is a keeper also. It was a treat to see presenters whose work and ideas I follow and use all the time – thank you over and over Mark Anderson, Julian Wood, Steve Bunce, Miles Berry. As ever with a TM, it is not the new ‘stuff’ shown I find myself pondering days later (although I am loving Moodstream, and where oh where is the Algorithm Alligator anyone?), but more the ‘big ideas’ behind them – it is all about being Julian’s ‘purple cow’. That image of a purple and white fresian, btw, is my transformative take away from this TM! (Here is Pam’s picture of same.) 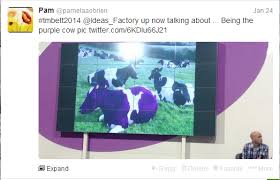 What did I found myself noticing after about the first hour however? I was feeling a little uncomfortable. Physically – sitting squished between two other people, no matter how much I love them, is not my idea of a learning space. Professionally – as a TM junkie, and an erstwhile TM organiser this side of the pond, what I love about TM most of all is the ever-so-slight-anarchy that can reign, especially during break-out sessions which I guess were not possible in this TM. I appreciate the amazing work put in by volunteer organisers Drew Buddie, Ian Usher and team; but I just couldn’t keep away the thought that with a TM this big, it was always going to be what it turned out to be – a very linear bunch of macro presentations followed by a very linear bunch of nano presentations. The quality of each presentation was top notch, as was the calibre of those in the audience; I just couldn’t help thinking each presenter deserved a less jaded arena.

The idea to have a gigantic TM is still a great one, but the format will need upsizing. And though the above sounds like a rant or a moan, it truly isn’t – I am still glad I went, I totally appreciate everyone’s contribution, and for me TeachMeet still rocks!!!